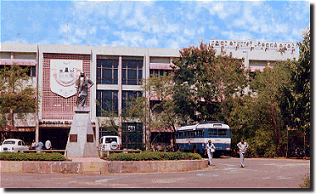 Madurai Kamaraj University, located in Madurai town (in southern Tamil Nadu, India) established in 1966, has 18 Schools comprising 72 Departments. The Directorate of Distance Education of the University has a student strength of about 1.30 lakhs. The University has 109 affiliated Colleges (9 Autonomous) including other approved institutions and 7 evening colleges. There are centres which promote research potential of teachers. Madurai Kamaraj University, or simply Madurai University was named after the historical city of Madurai, the ancient capital of the Pandyan rulers and the seat of three famous Tamil academies going back to the beginnings of the Christian and even perhaps an earlier Era, was inaugurated on 6th February 1966 at the heart of the city. Its nucleus was the Extension centre of the University of Madras located at Madurai. Two years later, the foundation stone for a new campus was laid by Dr Zakir Hussain, the then President of India on Madurai - Theni road, 13 kilometers to the west of the city. Since then the campus has grown into a beautiful University township with an extensive area of about 750 acres (3.0 km²), appropriately called in Tamil "Palkalainagar" (means university township). And in 1978, the name of the University was changed to Madurai Kamaraj University to honour one of the most illustrious sons of our country, Late Mr Kamaraj (ex-Chief Minister of Tamil Nadu). Official Website: http://www.mkuniversity.org/
Posted by madboy at 3:13 AM